In 1875, three influential families, the Drummonds, Shearsons and the Warracks, consulted with Bishop William E. McLaren regarding the establishment of an Episcopal Church mission in Wheaton. Six years later the small congregation was ready to build its own church and a lot at West and Wesley streets was purchased for $300. The Rev. Theodore N. Morrison, D. D. was the Vicar at this time. The cornerstone of the new church was laid by Bishop McLaren on December 18, 1881, and despite severe winter and spring weather, the church – now Trinity's historic chapel – was built. The total cost of the building and materials was $4,063.35. The chapel is the oldest church building in Wheaton in continuous use.

Other buildings were also added to the Trinity campus. The Guild House, which was a space for meetings, was added in 1893. There had been plans in the 1920’s to build a new, larger church and chapel on the property. This design followed typical Anglican design with a church and chapel connected by a covered walkway called a cloister. It would also include a parish hall which would include a small stage and provided space for sports and other activities. Another more unusual feature of this plan was to include a swimming pool and locker rooms beneath the church. Only the parish hall and bell tower was built and it was finished in the spring of 1925.

In the mid-1950’s, a new plan was suggested. This plan included a parish hall, a large church and a smaller chapel which would connect to the church with a covered walkway called a cloister. A study of the facilities and the chapel was conducted in 1956 and it was suggested that the chapel be torn down due to the need for expensive repairs. Only the larger church was completed in 1958. The members of the parish supported the repairs of the chapel, and additional repairs were made several times in the next 50 years.

Improvements and updates to the church property were made in 1996. The property also includes a columbarium – a sacred area designated for the installation of cinerary urns and a meditation labyrinth. The gardens were designed in large part by the late Rev. Deacon Robert Taylor with additional work by his son, Brad Taylor.

The chapel was placed on the National Register of Historic Places in 1975 which coincided with the centennial celebration of the founding of Trinity Church.

A History of Trinity 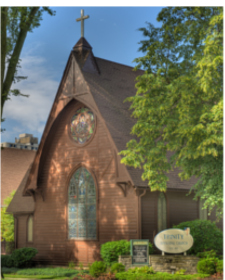 The architectural style of the original chapel is a “stick” style commonly referred to as “Prairie Gothic.” This was common in buildings built from 1855 – 1900, the style is informal and relaxed. Other characteristics of the style and this building in particular are:

The architects were Treat and Folts and the builder was Henry Dann Compton. The windows were furnished by W.H. Wells and Brothers.

Inside you will notice the handsome open-timbered ceiling. Cross beams were installed in 1919 to counter spreading of the walls. The interior is finished in oiled pine and stained walnut. The chapel's layout is reminiscent of a late medieval village church. This “neo-medieval” design was the result of the Cambridge Movement which advocated the restoration of earlier ecclesiastical architectural forms and traditions to the Anglican Church. The church was originally heated by a large stove and lighted by kerosene lamps placed on wall brackets throughout the structure.

Over the years additions and improvements have been made to the building. In 1894 a Kimball pipe organ was purchased for $1000.00 and installed in the front of the church and was later replaced by a small electric organ. At the same time electric lighting replaced the kerosene lamps and a partial excavation of the basement was completed to install a furnace to replace the wood stove. The current chandelier light fixtures were added in 1926. Their Gothic arch shape echoes most of the building's windows.

In the late 1950's the existing main church building was added that seats 428 people and provided additional classrooms. At this time the decision was made to retain the original church building. The chapel was placed on the National Register of Historic Places in 1975 which coincided with the centennial celebration of the founding of the church.

In 1997 an extensive $1.8 million renovation and expansion project extended and modernized the parish hall and classrooms in the basement. 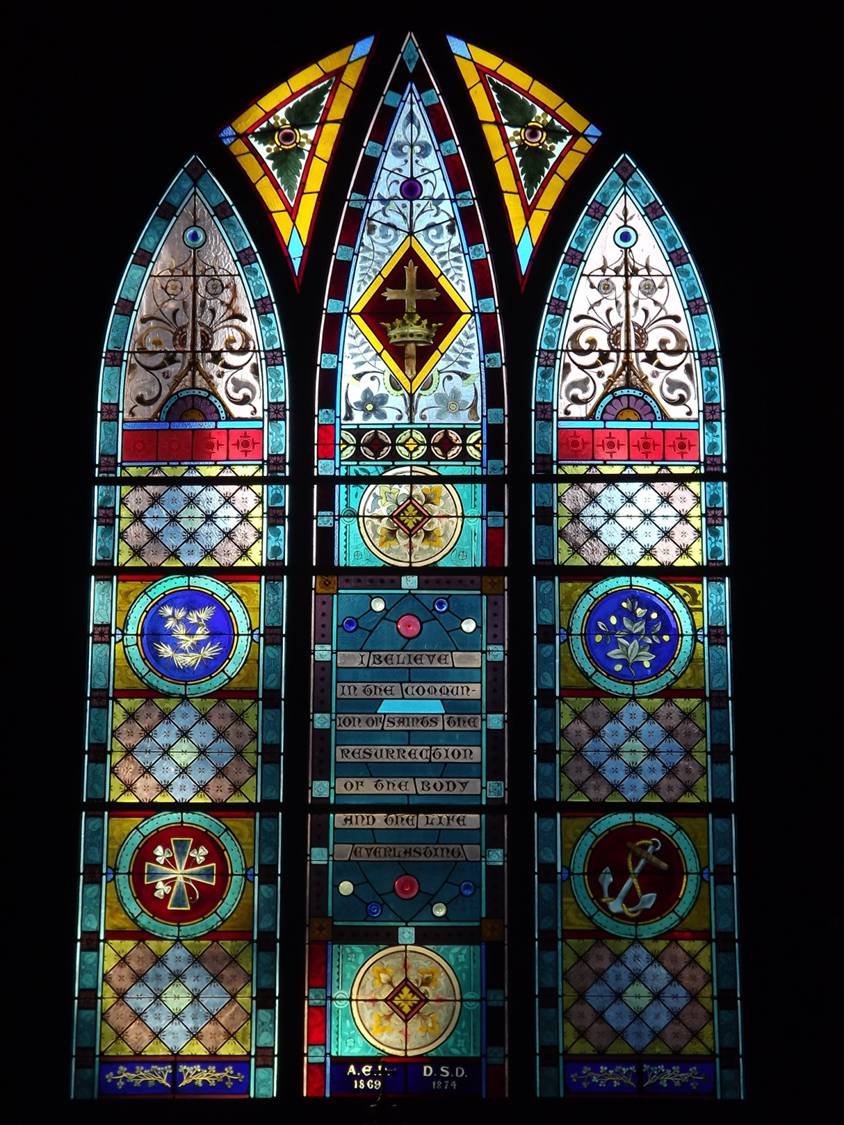 Despite its name, this window is on the geographic East wall opposite the altar and below the round “rose” window. It is also referred to as the Drummond Memorial window. The window is composed of three lancet panels contained within a single, Gothic-shaped space. It is inscribed with “I Believe in the Communication of Saints, the Resurrection of the Body and the life Everlasting,” as well as other references to The Trinity. Subtle leaf vine patterns suggest the energizing, renewing power of nature. Other images contained in the Drummond window include a crown encircling a cross which represents heavenly reward after suffering earthly trials; an anchor which was an early symbol for Jesus; two sets of interlocking circles representing the Trinity and shamrocks-the plant's three leaves also symbolizing The Trinity.

Thomas and Delia Drummond were founders of Trinity. Thomas served as a federal judge with jurisdiction over admiralty and patent law and he heard cases with regard to slavery issues. He presided over a dozen cases tried by Abraham Lincoln and became a friend of the future President’s. In 1869, President Grant nominated Drummond to a seat on the newly established Court of Appeals. Judge Drummond retired to Wheaton in 1884 and died in 1890. His home is the blue house across Wesley Street from the chapel. 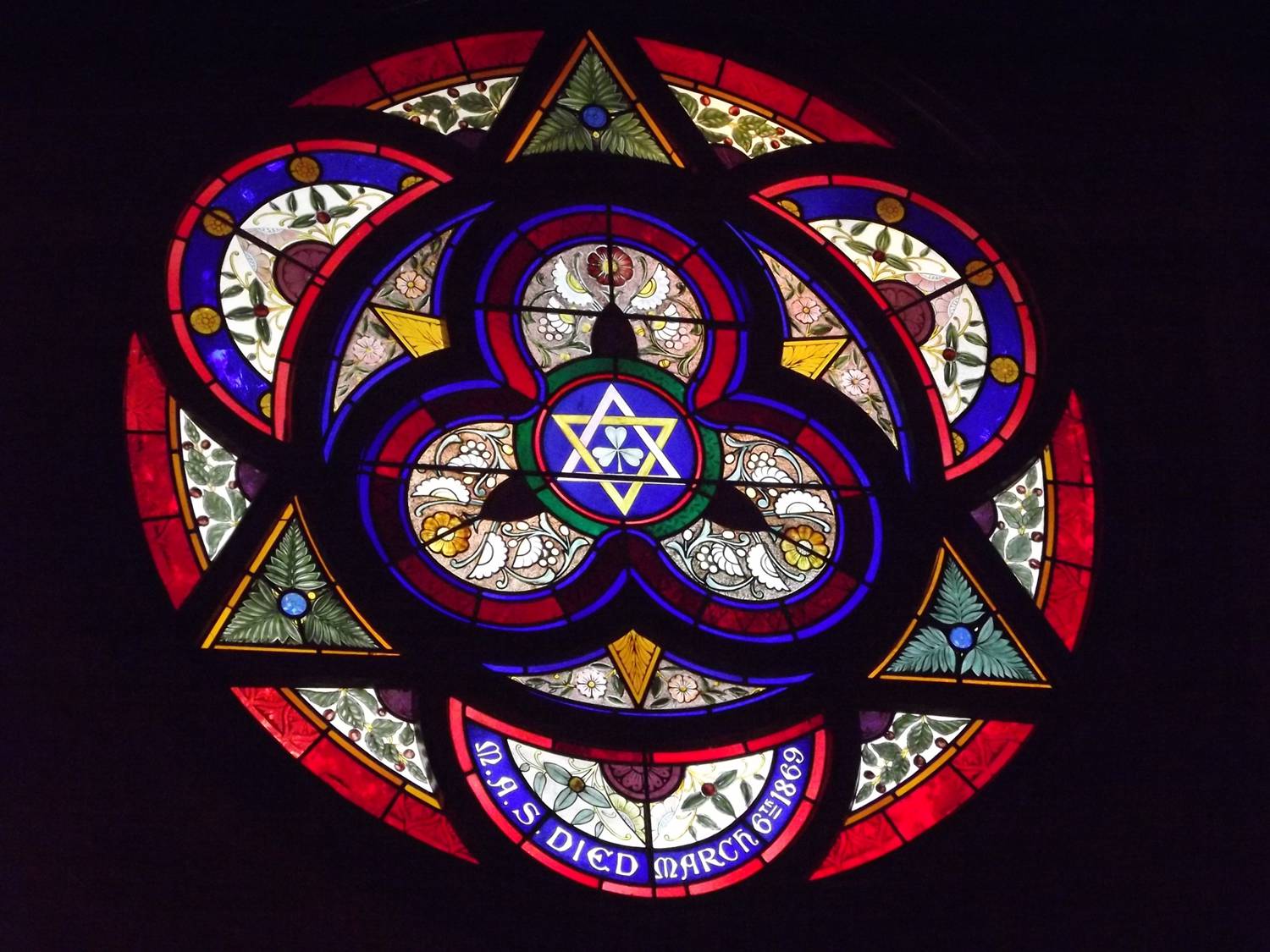 Also Known As "The Rose Window"

This window is found at the top of the East wall. It was a gift from W.A. Shearson. What appear to be chalices connect the outer forms to the center circle which features a six-pointed star and a clover leaf in its center. The six pointed star, sometimes called the “star of David”, has been identified as signifying the unity of heaven and earth, and the conscious and unconscious. This star is also called “the Creator’s star” because its six points each represent a day in creation. The Trinity is symbolized in a wide variety of ways throughout the entire window.

William Frederick Arrindell Shearson was a very prosperous corn merchant who came to the United States from Canada after emigrating from England. He and his wife Marion had 4 children. Their youngest son, Edward, founded the Shearson investment banking and brokerage company. 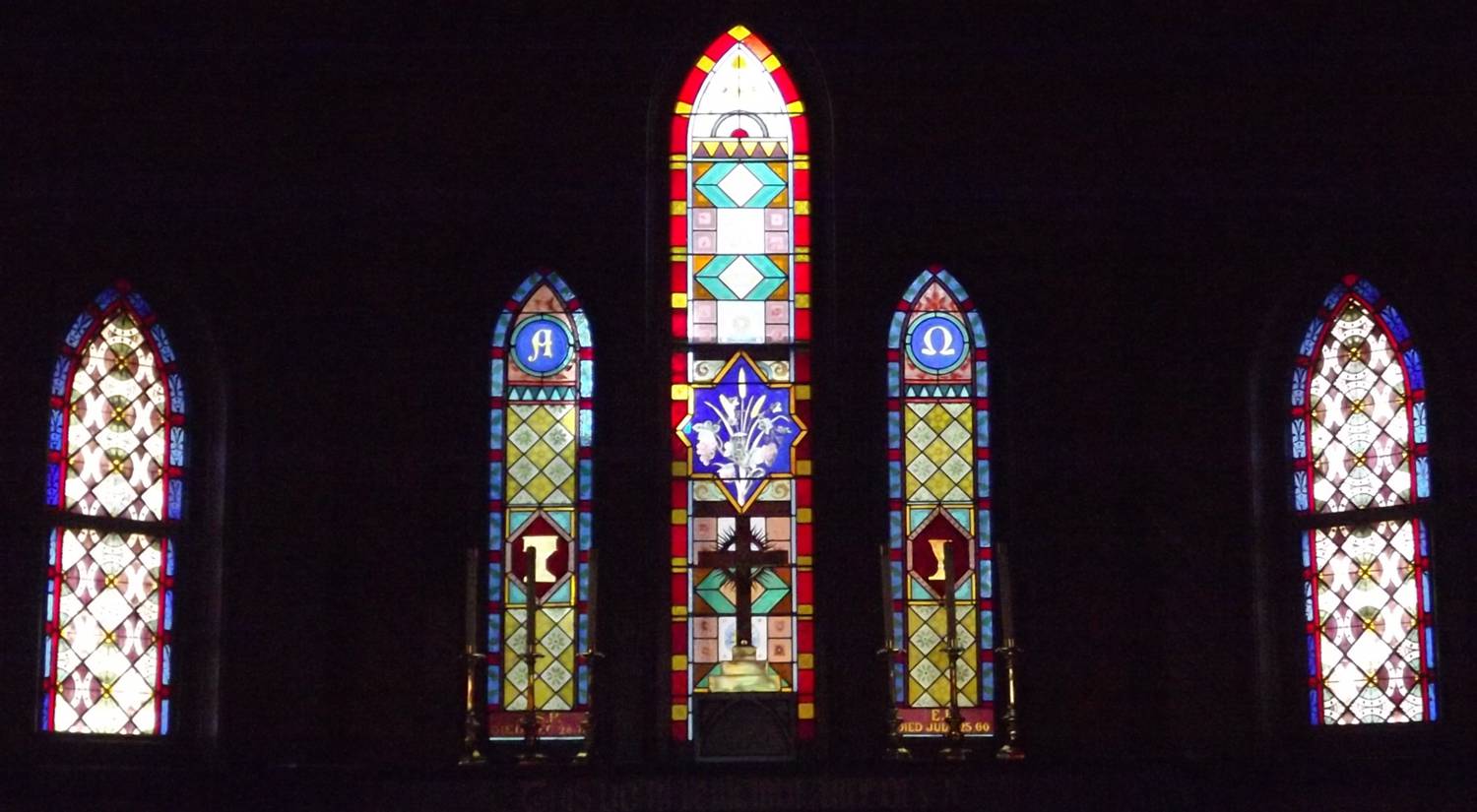 This window is a group of three lancet windows behind the altar. The chancel window was a gift of Mrs. James S. (Fannie) Peironnet, depicting the Sacraments of Baptism and Communion. The wheat and grape motifs represent the bread and wine of The Eucharist. The symbols of Alpha and Omega represent the Beginning and the End.

The Peironnets were early members of the Trinity mission church. Mr. Peironnet was a prosperous lumberman in Peru, IL before he came to the Chicago area to begin an investment firm, J. S. Peironnet & Co., which became a well respected member of the Chicago Board of Trade. James Peironnet served as the second mayor of Wheaton from 1893-98 and again in 1901-04. Two great grandchildren of James Peironnet are current members of Trinity: Mrs. Peter (Lois Rathje) Boecker and Justice S. Louis Rathje. 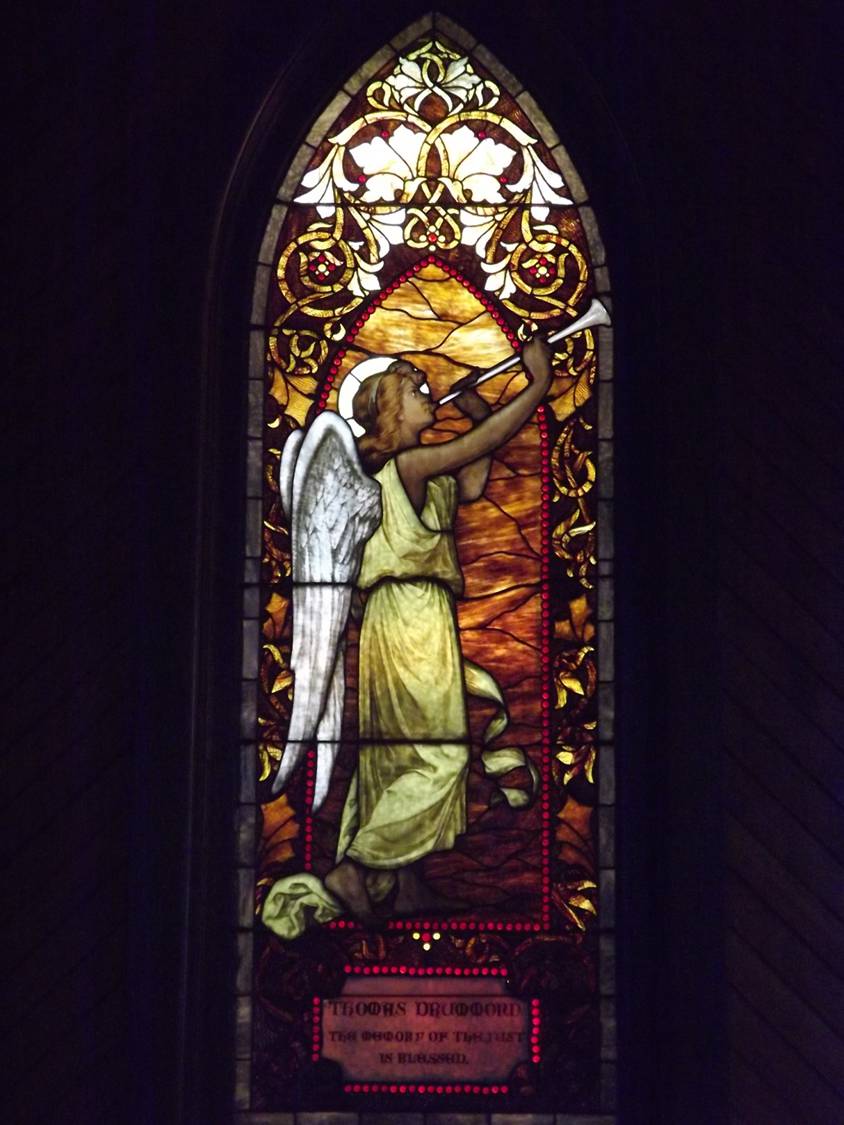 This was a gift from the Drummond family. Featuring a beautiful angel, this window was pronounced by its contemporary critics as wonderfully artistic in design and creation. The window is constructed in a style made famous by the Tiffany studio in New York , incorporating art nouveau influences popular at the turn of the century. The opalescent glass in shades of brown and ochre compliment the tones of the wood walls and accents throughout the chapel.

The window was designed by a well respected local artist, Christia M. Reade of Lombard. A talented artist in several media, Reade was known for carrying her stained glass work through from design to installation. After studying in Europe, she returned to Chicago to open a studio where she produced exquisite jewelry, watercolors and stained glass. With an eye for detail and color, the beautiful Drummond window is considered one of the better known windows that she produced. This window was placed around 1900. 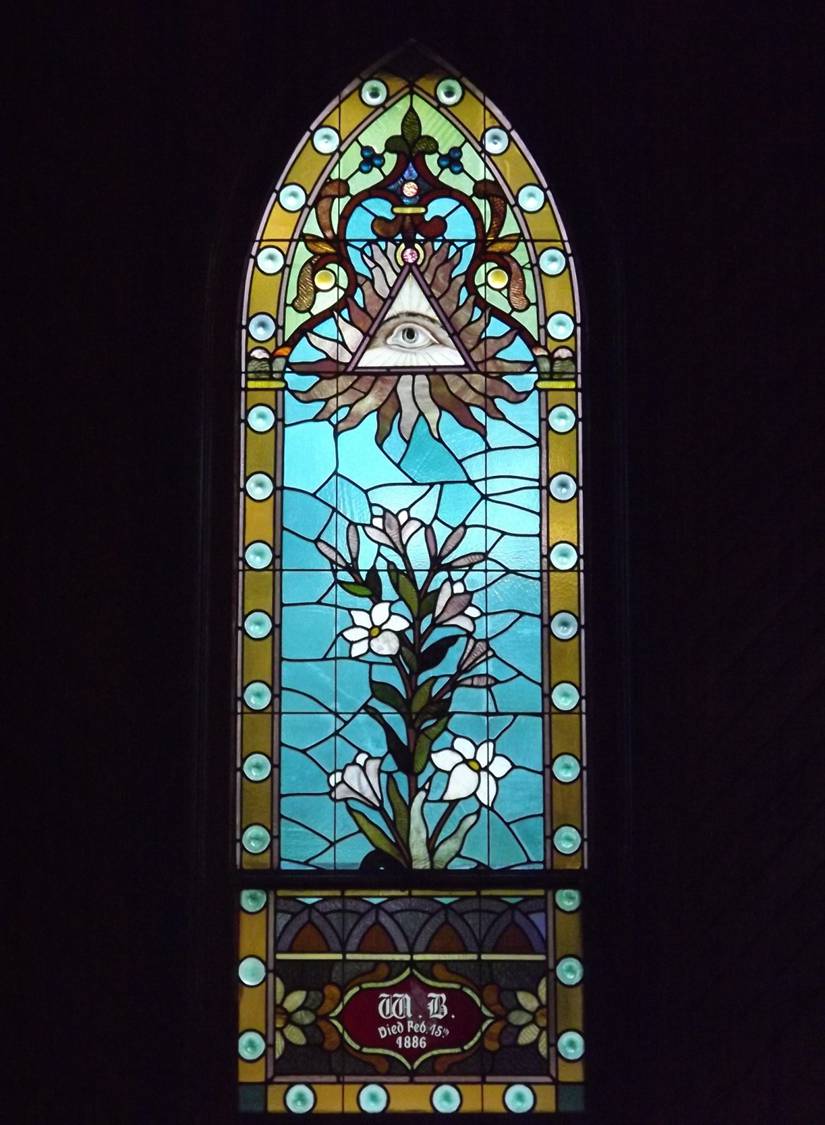 This window is dedicated to the memory of the father of Mrs. J.S. Peironnet. In addition to the Easter lilies which are a symbol of Christ’s resurrection, this window features a triangle encompassing an eye. The eye is suggestive of the omniscience of God – His “all seeing” power.

Fannie Peironnet’s father, William Baker, was the publisher of the Journal of Commerce and the proprietor of the successful mercantile company Tappan & McKillop. He died in Chicago in 1886. 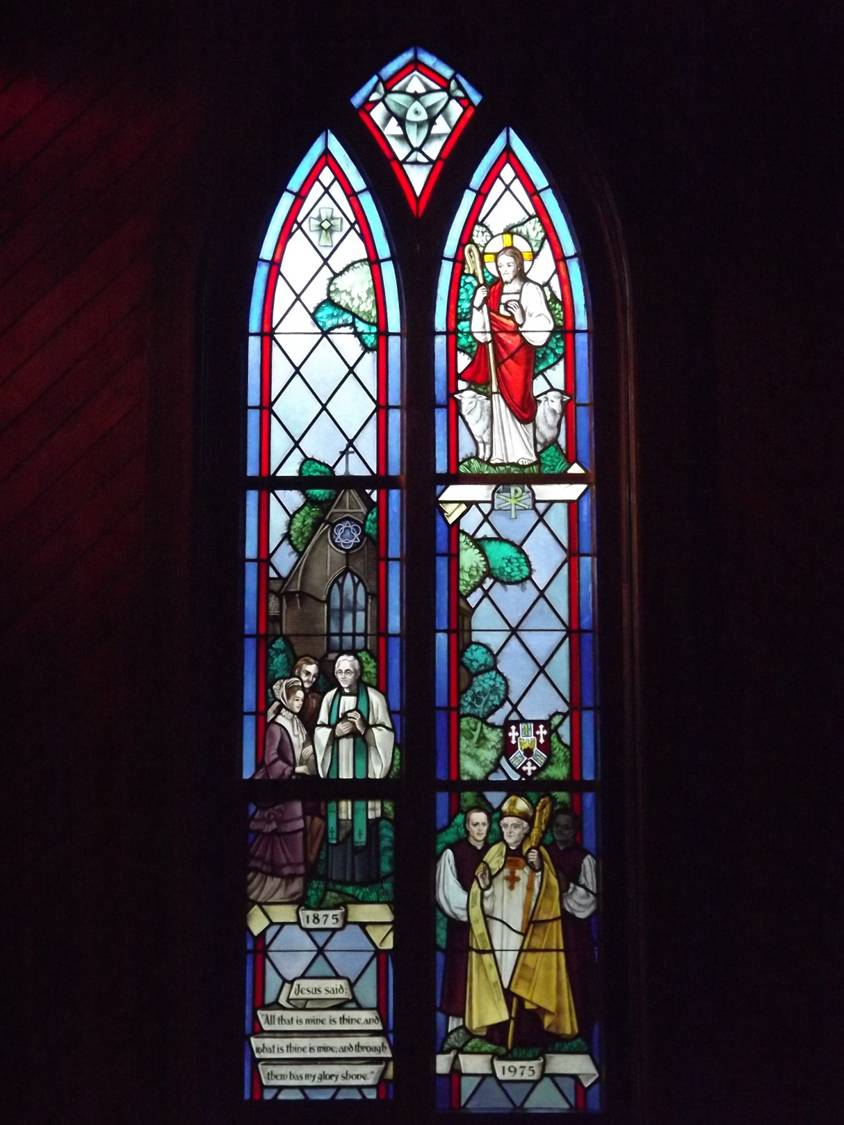 This was a gift from Mr. And Mrs. Fred Ockerland in 1975. A figure of the first rector, The Rev. Frank Hobart Millett, represents all the priests who have served Trinity. Also featured are The Right Rev. James W. Montgomery, Bishop of the Diocese of Chicago and The Right Rev. Quintin E. Primo, Jr., Suffragan Bishop of the Diocese of Chicago. The Most Reverend Arthur Michael Ramsey, the 100th Archbishop of Canterbury is shown holding his crozier or staff in the lower right hand corner of the window. Archbishop Ramsey came to Trinity during the centennial celebration.

The Centennial Window not only commemorated the 100th year of the chapel, but it also was given in celebration of the Ockerlund’s own wedding anniversary. They had been married in the chapel 25 years earlier. The window was designed by Karl Hackert Studios in Northbrook, Illinois and was made in Innsbruck, Austria.